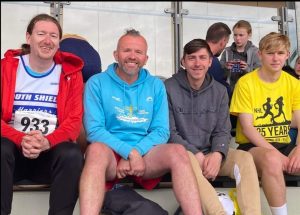 The weekend of May 14th and 15th saw the return of the North East Athletics Championships at Middlesbrough. South Shields had a small but keen squad in attendance and even managed to get on the medal table, notably due to the performances of Anthony Hall.

In the 1st event of the day Neil Yorston bagged a silver medal in the 400m hurdles to get the squad off to a great start. Next up was Benjamin Weston in what was the most competitive event of the day, the 800m. Benji put in a great performance and had the crowd on its feet but in spite of his efforts, finished outside of the medal positions.

The afternoon’s field events gave Anthony Hall the opportunity to defend the title he won last year, the senior men’s long jump. The competition was split between a clear battle for the gold and a battle for bronze. In what were quite trying conditions and under pressure from Zaid (Northumbria University), Anthony beat his previous PB 3 times on the path to gold. In the battle for bronze, Lee Hetherington managed to sneak in a solid round 5 jump to edge out Neil Yorston.

With the wind picking up inside the stadium the senior men’s javelin was going to be a challenge. Anthony, Lee and Neil lined up and all got off to a decent start in round one with Anthony taking the lead. The 2nd round saw Lee put in a solid throw to edge in to the bronze medal position ahead of Neil as Anthony once again found himself in a battle for the gold with Jonathon (Crook). Lee had to retire due to injury after round 4 after skipping round 3 but Neil fought on in the ever worsening conditions. Sadly unable to close the gap the bronze stayed with Lee. Out in front and the battle for gold saw the distance increasing in every round, each time Anthony was put under pressure he responded by throwing further, breaking his PB in rounds 3, 4 and 5. A brilliant performance and securing his 2nd gold medal.